So...  it was Sunday afternoon.  I was full from a big lunch.  The kids were happily watching TV and playing video games.  We were all resting and relaxing.  What's wrong with that on a Sunday afternoon, right?  So why did I feel guilty slugging the day away?  Probably because it was a beautiful day, warm and sunny with spring in the air, and I just couldn't succumb to the sluggardliness.


So I grabbed my Smokies map and looked for a short trail that was relatively close that we could get to and hike in just a few hours.  Voila - the Crib Gap Trail!  This is a short (1.6 miles) trail that connects the Turkeypen Ridge Trail with the Anthony Creek Trail that leads into Cades Cove.  Jesse and I had done the Turkeypen Ridge trail on a previous hike, but I've never been on this little connector.  I collected Duncan (my youngest son, 9 years old) and said "You wanna go for a hike?"  He turned off the Wii in a flash and had his boots on ready to go in just a couple of minutes.  He doesn't care where we're going, or if there's going to be scenery or impressive waterfalls - he just wants to go :-)


The trailhead for this hike is right on Laurel Creek Road in between the Townsend Y and Cades Cove.  Traffic was light today because the Cades Cove loop is closed for repaving for the next couple of months.  We were at the trailhead in 45 minutes and ready to go. 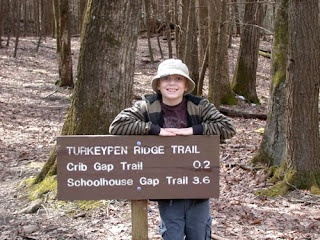 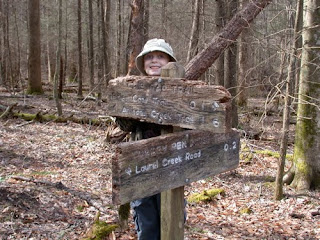 To be brutally honest there's nothing special about this trail compared to the rest of the Smokies.  It winds through hemlock-rhododendron woods and up over Crib Gap and then down through a drier pine-laurel forest towards Cades Cove.  There's no beautiful creek to follow, no outstanding views, no huge rocks to climb...  BUT, to say "there's nothing special" when you're in the Smokies is an oxymoron - it's ALL special.  And it's even better when you have someone to share it with like a 9-year old who can't stop saying "it's so beautiful here!" 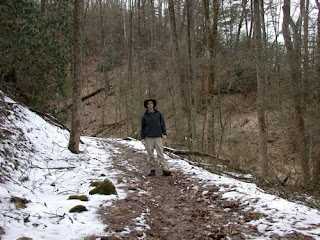 There was a little bit of snow left on some of the shadier banks, but most of it had melted and much of the trail was a muddy mess.  This trail is apparently frequented by horses which tears up the trail pretty badly when it's wet. 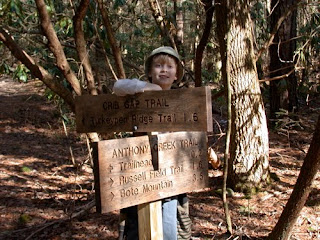 The Crib Gap trail ends at its intersection with the Anthony Creek Trail that leads south out of the Cades Cove picnic area and up to the ridge line and Appalachian Trail.  We took the extra 0.2 miles down to the picnic area for a snack and a break. 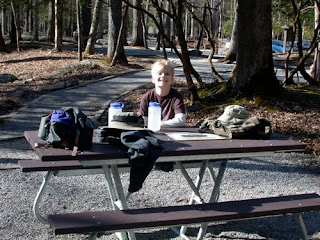 There's nothing quite like sitting on a big rock in the middle of Anthony Creek eating licorice... 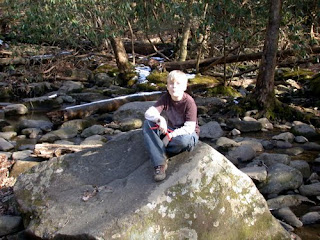 By now it was around 4:30 pm and likely to get dark soon so we turned around and headed for home.  The return trip was uneventful other than a few extra stops to rest a pair of weary little legs.  As we approached the trail head I convinced Duncan to walk an extra 0.2 miles to go see the trail that leads UNDER Laurel Creek Road.  This is a short trail that connects the Turkeypen Ridge Trail on one side of the road to the Finley Cane Trail on the other side.  And yes - this really is the trail, even though it looks more like a creek. 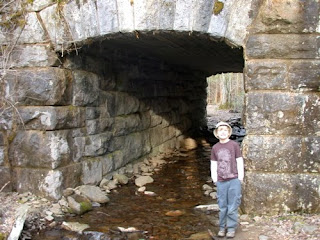 This coming week is spring break at UT, so I will be taking at least one more hike soon.  Planning to do the Little River Trail - Cucumber Gap Trail loop tomorrow, so look for another update soon.
Happy Hiking!
Posted by Randy Small at 7:03 PM