I've had my eye on this loop for a while...  I had actually intended to do it as an overnight backpacking trip, but decided on the spur of the moment to make a day-hike out of it on the Saturday after Thanksgiving. 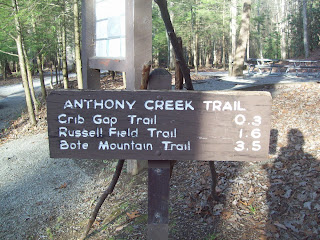 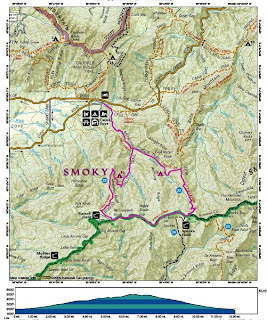 I have to start out by saying one thing about this loop - there are a LOT of ROCKS on these trails!  Rocks the size of marbles, baseballs, footballs, soccer balls, Volkswagens...  I spent a lot of my time watching my footing to avoid turning an ankle.  This entire loop is also a horse trail, so there are a lot of places where the trail is pretty beat up and muddy.

The trail follows Anthony Creek for much of the first part, and there were several creek crossings (mostly with footbridges).  The water was running high so that loud chatter of rushing water was a constant companion. 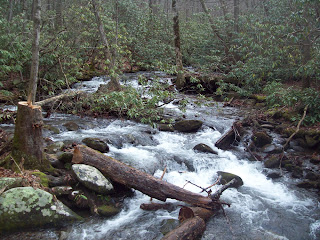 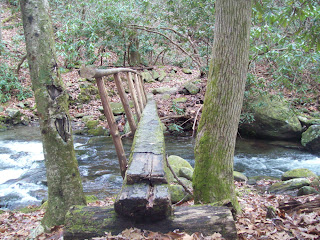 Anthony Creek trail winds its way up along the creek slowly gaining elevation as it wends its way between Leadbetter Ridge and Allnight Ridge.  After 1.6 miles it reaches the junction with Russell Field trail at the base of Anthony Ridge.  Anthony Creek trail continues on to the left (east), while Russell Field trail turns right (south) and ascends the flanks of Leadbetter Ridge on its way up to the AT. 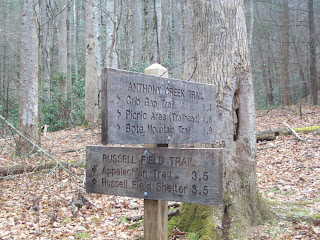 I took the Russell Field trail up, and I do mean UP.  As soon as you get onto this trail the elevation gain starts to kick in.  It gains about 1200' over the first 2 miles, has a nice 0.5 mile stretch of flat ridge-top walking, and then gains another 700' over the last mile up to the AT. 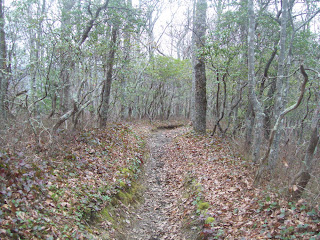 About a mile up you come to Backcountry Campsite #10.  All I can say is "ugh."  This is a rationed site due mostly I suspect to its size.  It's a tiny site directly off the trail and there is really only 1 flat spot, and it was a muddy mess.  Maybe it's nicer in the summer (the little brown book says nice things about it), but I was glad I wasn't staying there.

As the trail heads up Leadbetter Ridge there is a nice flat section of ridge-top walking where you are staring straight ahead toward the ridge that you will ultimately be climbing up. 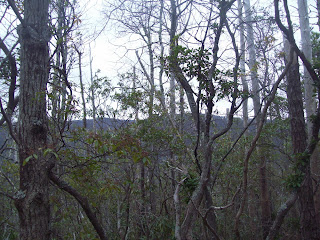 After climbing around the western slopes of McCampbell Knob the trail dead-ends into the AT at Russell Field.  The area had been cleared of trees by Russell Gregory (for whom it, and also Gregory Bald are named) to graze cattle during the summers.  Most of the area has been overgrown with trees again, but there's one small area that is still clear that you can reach by taking a side trail once you near the top.  At the Russell Field - AT junction is the Russell Field shelter.  This is a very nice shelter, and has been upgraded in the last few years.  There are cooking & eating benches and tables around the front, a skylight over the sleeping area, and a tarp has been hung over the front to keep the wind out.  I stopped here for a few minutes to rest and have a snack. 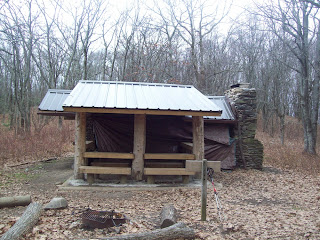 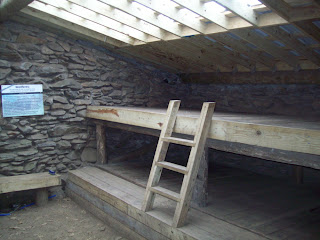 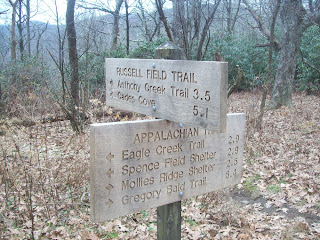 From here I headed east (north) on the AT toward Spence Field.  This stretch of the AT is 2.9 miles and reminded me of many of my early days of hiking. 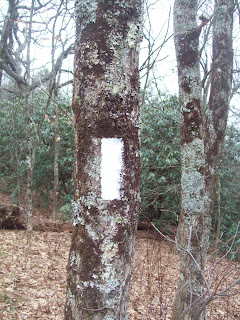 These white blazes marking the Appalachian Trail mean a lot to me.  My first real backpacking trip took place in October of 1985 when I was a freshman in college near Johnson City, TN.  For fall break some friends and I backpacked a short section of the AT near Roan Mountain.  And I was immediately captivated, both by hiking and backpacking, and by the AT itself.  I've been a member of the Appalachian Trail Conservancy ever since, and still dream that one day I'll be able to do a thru-hike.  It felt great to be back up on top of the Smokies - there's nothing quite like the feeling of walking along the top of a ridge and looking down in to North Carolina on one side and Tennessee on the other.

The 2.9 miles from Russell Field to Spence Field went fairly quickly.  About this time the sun started to peek out occasionally from behind the clouds giving the whole landscape a nice glow.  Spence Field still has a lot more open area than Russell Field which makes it quite picturesque. 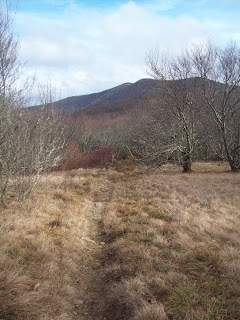 Just 0.2 miles down Eagle Creek trail from Spence Field is the Spence Field shelter - a twin to the Russell Field shelter.  I dropped in here for a break and to eat some lunch and met some other hikers who were settling in for the evening (despite the fact that it was only 1:30 pm). 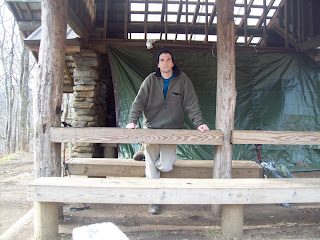 Here in Spence Field is where the Bote Mountain trail meets up with the AT, and this was to be my path back down. 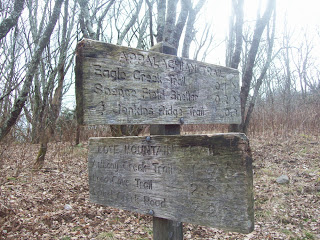 Once on the Bote Mountain trail I again had to contend with the rocks...  But at least I was headed down instead of up this time.  The trail is pretty steep here - drops about 1200' in 1.7 miles to where it junctions with the Anthony Creek trail.  There were lots of Beech groves along this stretch.  I love Beech trees in the winter because they hold on to their golden brown leaves throughout the winter giving some really nice color to the landscape. 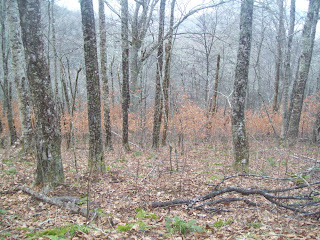 The junction with the Anthony Creek trail put me back on my original trail, just 3.5 miles from Cades Cove, but still had to contend with the rocks.  This section continuously follows Anthony Creek and the trail is often on a ridge well above the creek providing some amazing views.  I stopped several places just to contemplate the beauty of a rushing mountain stream and the many little waterfalls. 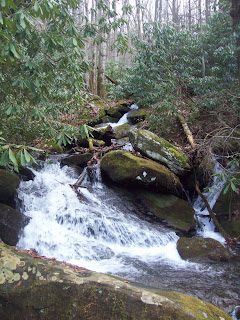 Along this section you come to Backcountry Campsite #9.  In contrast to site #10, this one was quite pleasant.  It's fairly large with a couple of nice fire pits, a wide space, and sits just above Anthony Creek.  Definitely someplace I'd love to come back to. 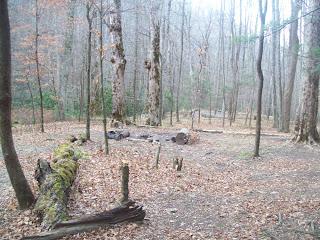 Shortly thereafter I got back to the Anthony Creek - Russell Field trail junction and retraced my steps back to the Cades Cove picnic area.  It took me just about 6 hours exactly to make the loop, including a couple of breaks for food.  Pretty good time for me, especially considering the elevation gain over the first 5 miles.  It was a great day in a lot of ways.  The loop was challenging, but not overly difficult.  The weather was great - temperature around 45-50 degrees most of the day, with some nice sunshine.  I alternated between hiking in just a t-shirt to a t-shirt + polypro long underwear shirt to t-shirt + polypro + fleece jacket + stocking cap depending on the wind and the sun.  Met lots of other hikers too.  One guy who had been out for a solo backpack, a guy out on his horse, a family who was out for an extended backpacking trip, and a couple of guys who were staying at the Spence Field shelter.  Not to mention several sets of day-hikers.

This was another good hike for me in terms of making connections too.  I had done the first little bit of Anthony Creek trail a couple of times before.  Once with my family and my brother, his wife and a friend on New Years Day, 2000.  I seem to remember that it was about 60 degrees then!  And Duncan and I had hiked the 0.2 miles between Cades Cove and the Crib Gap trail a couple of years ago.  I had also been to the Bote Mountain - Anthony Creek junction earlier this year, and remember plotting to do the Anthony Creek loop at the time.  Best of all, I had previously done the whole AT from Newfound Gap to Fontana Dam many years ago - it was one of my first backpacking trips in the Smokies not too long after we moved here.  It was great to retrace those steps and stop in at the shelters where I had visited before.

This is a great time of year to be out on the trails, so don't let the cooler weather scare you off.  Be prepared with some good layers, but head on out there!  With the leaves off the trees the views are often spectacular.  Til next time, happy hiking!
Posted by Randy Small at 9:20 AM