A group of guys from church do hiking trips once in a while and this weekend we had a trip to Brushy Mountain planned.  Up early and at the Grotto Falls parking area by 7 am!  On the way in we saw a young black bear ambling across Cherokee Orchard Road.  And then as we were getting ready to hit the trail we saw another black bear down by the garbage cans at the other end of the parking area.  This one was BIG, and didn't seem at all perturbed to find mere humans in his domain.  In fact, he apparently found us quite interesting... 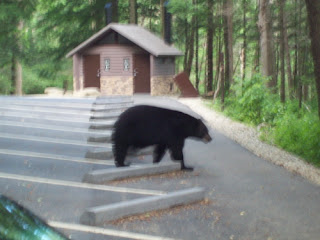 After rattling the lid on the garbage can trying (unsuccessfully) to get it open he wandered over toward us.  He was getting closer and closer and we were about to jump into the cars when he decided to turn down into the woods.  Phew - nothing like a close encounter of the bear kind to get your blood pumping early in the morning! 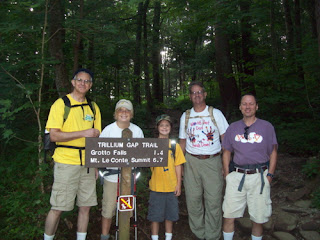 Here's our crew getting ready to hit the trail: Greg, Duncan, Emery, Jack & Brad
We headed up Trillium Gap trail and made good time up to Grotto Falls.  This early in the morning the light was dim and misty and the falls had an ethereal quality to them.  We took the required pictures of folks behind the falls :-) and then headed on up the trail. 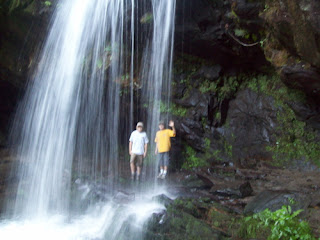 Duncan & Emery behind the falls.
Trillium Gap trail between Grotto Falls and Trillium Gap is a nice winding trail, in places flat and sandy and in other places rocky and tree root-laced.  It moves continually up, but relatively gently and is never really steep.  It winds through some nice big old trees and often crosses or follows creeks so it's a very pleasant trail. 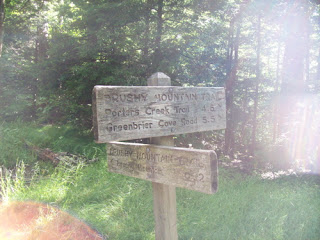 Trail sign at Trillium Gap.  We were taking the Brushy Mountain trail up the summit of Brushy Mtn.
Trillium Gap apparently used to be called Grassy Gap, which is a much more apt name.  It's a saddle between Brushy Mountain and one of the lower ridges of Mt. LeConte and is full of grass, but apparently devoid of Trilliums.  Regardless, it's a pleasant spot to sit and rest a few minutes before tackling the last 0.4 miles up to the summit of Brushy Mtn.

As the trail climbs up toward the summit of Brushy Mtn. the plants change dramatically.  At Trillium Gap we see some spruce trees starting to appear.  On the dry hike up Brushy Mtn. the trail is lined with Mountain Laurel and Galax (both still in flower at this higher elevation) and some unusual higher elevation species start to appear.  These include Sand Myrtle and Rugel's Ragwort, the latter a Smoky Mountain endemic species found only at higher elevations.  The top of Brushy Mtn. is devoid of trees and instead covered with laurels, rhododendrons and sand myrtle.  This allows some fantastic views around all sides.  To the north we could see Pigeon Forge, to the east Greenbrier Pinnacle and to the west the lower ridges of LeConte. 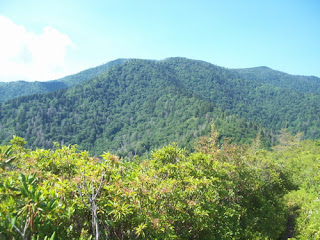 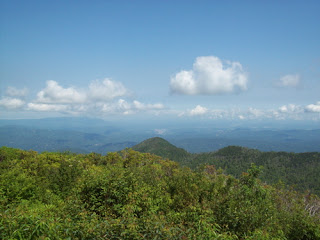 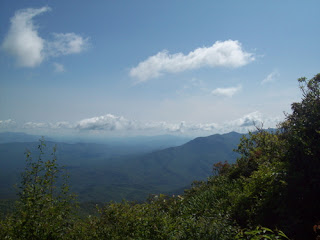 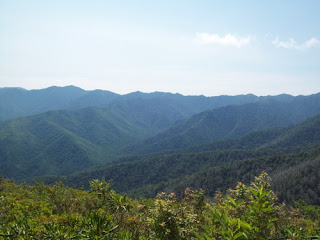 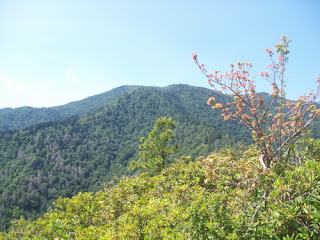 We stopped here for lunch and took in the amazing views.  Definitely a place worth visiting - I think I'll have to come back here for a view of the trees in the fall.

Heading back down was considerably easier simply because it was all down.  The boys did a good job coming up the trail although it taxed their stamina at some points.  On the way back they were again full of energy.  We stopped again at Grotto Falls so they could climb and jump on the rocks and play in the water.  By now (about 2 pm) the falls were packed with people. 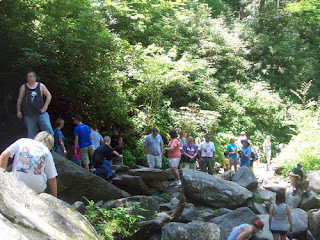 And they were also beautiful in the sunshine! 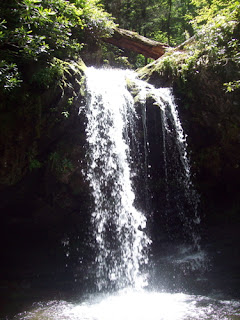 This was a really nice hike overall.  The weather today was perfect - cool temperatures, yet sunny.  Getting an early start was great since we missed the throngs of people on our way up the trail and had the falls nearly to ourselves the first time we passed them.  The trail is in good shape for most of the way and has interesting plants, creeks and views.  The hike up Brushy Mtn. was really nice - fantastic views and cools plants.  Definitely someplace to go back to!

Til next time, happy hiking!
Posted by Randy Small at 6:10 PM