When I decided to hike all of the trails in the Smokies, I knew that meant I'd have to go back and hike the Laurel Falls trail again, which I did NOT relish. For those of you not familiar with it, the Laurel Falls trail is probably the most hiked trail in the whole park (at least the first 1.3 miles of it).  It's paved, always crowded, and (in my humble opinion) leads to a very mediocre water fall... 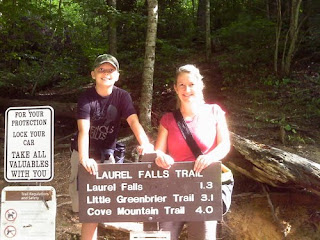 But in order to finish the trail and get to the Cove Mountain trail, I had to do it again.  Sarah agreed to help me shuttle my car to Sugarlands Visitor Center and then took me up to the Laurel Falls trailhead.  She and Duncan joined me for the first part of the trail (up to the falls) and it was a nice day for a hike.  There were zillions of people, but almost all of them stopped at the falls and then turned around to go back to the parking lot. 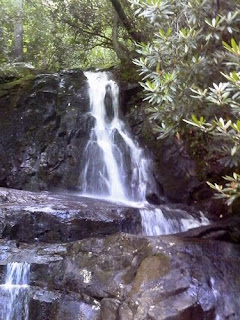 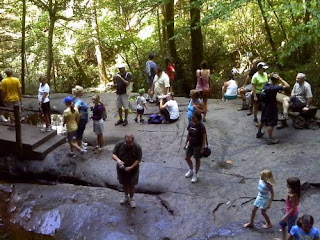 From the falls the trail winds its way up to the crest of Cove Mountain.  There's an elevation gain of about 1500 feet from the parking lot to the top of Cove Mountain over a 4-mile stretch of trail.  It's a fairly steady climb, but rarely steep except for the last 1/2 mile.

Along the way up Laurel Falls trail I passed the junction with the Little Greenbrier trail.  I can vividly remember the January day I hiked that trail, and imaging when I might be back.  That's one of the neat things about doing all the trails in the park - seeing how they all connect with each other. 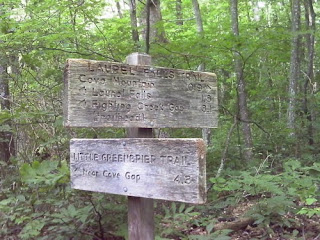 According to the little brown book, the area above Laurel Falls was never logged or burned, and represents true old-growth Smokies forest.  I can believe it now, having seen the trees.  There are some of the biggest trees I've ever seen in the park in this area - particularly the Tulip Poplars.  The one pictured below was easily 6 or 8 feet in diameter at the base, and it was just one of many really big trees. 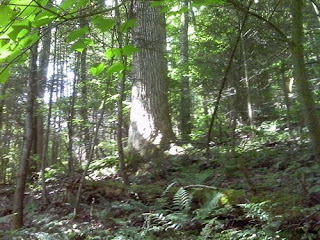 The trail winds up the ridge and ultimately terminates at the top of Cove Mountain where the Laurel Falls trail and Cove Mountain trail meet. 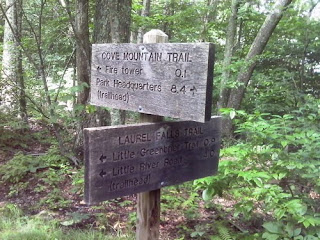 My way down was to the right (east), but first there was a short (0.1 mile) up to the old fire tower which has been converted to an air pollution research station.  You can climb about 1/3 of the way up the tower, but that doesn't get you above the trees so there aren't any good views. 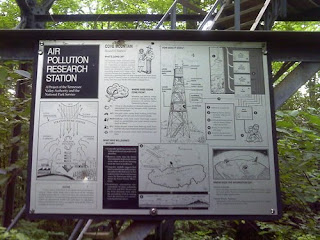 From here I headed back down the Cove Mountain trail which ends at the Park Headquarters near the Sugarlands Visitor Center.  It's a different kind of trail from the usual Smokies trail.  It looks more like an old road, complete with tire ruts, than a trail.  It also looks like it's not used very often as it was quite grassy. 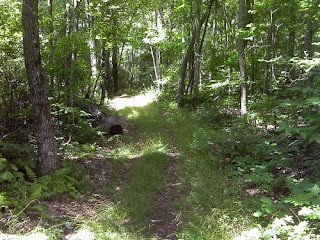 Cove Mountain trail winds along the northern boundary of the park, and slowly descends from the summit of Cove Mountain (4000 ft) to Sugarlands (1500 ft) over 8.5 miles.  There's not much along the way to break up the hike - no trail junctions or overlooks - just hiking along.  There were some cool plants though. 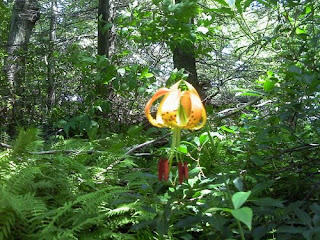 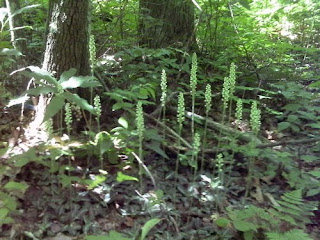 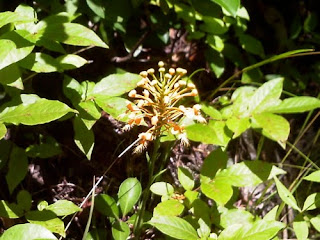 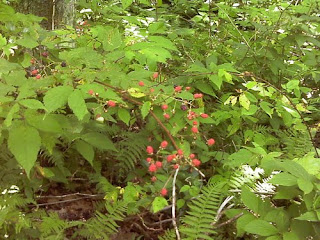 Blackberries, blueberries, and huckleberries, all almost ripe
And while I didn't actually see any bears, there are clearly a LOT of bears in the area because the whole trail was covered with piles like this: 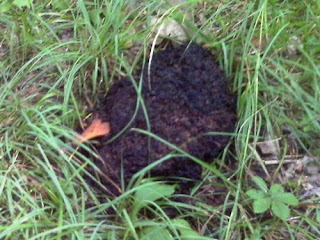 The trail is so close to the border of the park that in many places there are roads and houses that are very close to the trail.  This amazing house was literally 5 feet from the trail.  There was a sign on the tree that said "Forget the dog, beware of owner!" 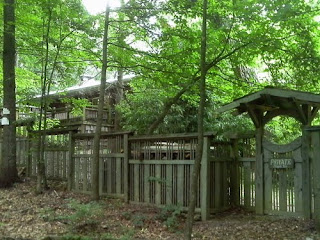 As the trail approaches Sugarlands there's a waterfall called Cataract Falls.  I don't know if it's just because there hasn't been much rain lately, or what, but it was pretty pathetic looking. [*see note at bottom  of post] 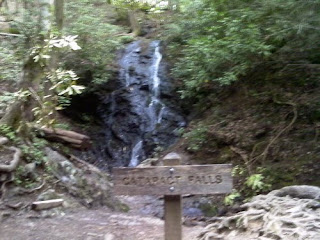 The trail ends up at the Park Headquarters, just down the road from Sugarlands Visitor Center where my car was parked.  After 12.5 miles it was a nice sight to see, although I could hear the traffic from about a mile up on the trail.  (Note that the trail mileage on this sign differs from the sign on top of Cove Mountain by 0.2 miles - I'm not sure which one is more accurate, although this sign is clearly newer) 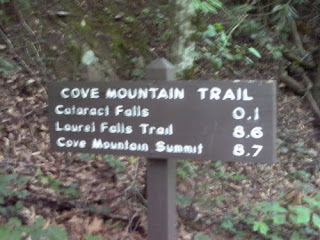 All in all it was a good day on the trail.  I'd love to go back to the Laurel Falls trail and spend some more time looking at the big trees, and the wildflowers on the Cove Mountain trail were great.  It was a nice solo hike - lots of solitude and time to think.

Til next time, happy hiking.

*note added 2 March 2011:  apparently Cataract Falls is NOT always pathetic looking...  just saw a recent picture of the falls overflowing with water and it was quite beautiful!  for example check out the picture here.  my photo was from the height of the dry season (mid-summer) while the falls seem to be best observed in spring when the water is really moving.
Posted by Randy Small at 7:45 PM