I've always heard amazing things about Gregory Bald while the Flame Azaleas are flowering. This weekend was unexpectedly free, so I called my buddy Shane who was game to join me for a backpack.  It's a little early in June for the azaleas to be flowering (they're usually at peak about the 3rd week of June), but I was hoping that since we've had an early spring they'd already be started. 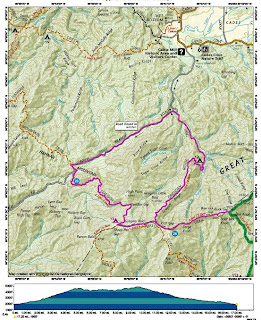 We started at the Gregory Ridge trailhead at the end of Forge Creek Rd in Cades Cove. 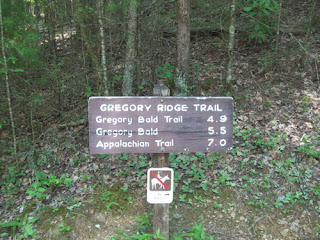 The first mile or so gains elevation, but fairly gently, until it reaches Campsite #12. This is a fairly nice site - right near a creek and with a nice fire ring area, but not too many good tent sites, and the best one is right next to the fire ring and bear cables.  Might be good for a small group.  There is an upper tenting / fire ring area too, but a lot of downed trees up there. 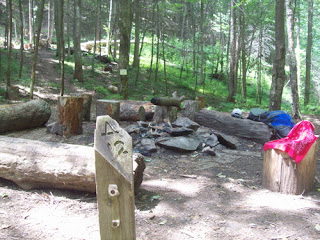 From Campsite #12 the trail immediately climbs a steep ridge over to the west side of Gregory Ridge and stays steep the rest of the way up (it's about 5 miles from the trailhead to the junction with Gregory Bald trail). We were huffing and puffing all the way up, and made many more rest stops than I'd care to admit. In the upper reaches of the Gregory Ridge trail we started seeing a lot of flame azalea and mountain laurel in flower - they were absolutely gorgeous!  The trail is in pretty good shape despite its steepness.  There is one area where it's fairly badly rutted, but for the most part it was good trail. 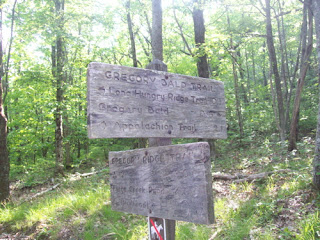 We reached the junction of Gregory Ridge trail with Gregory Bald trail and decided to spend an extra hour or so to do the 2 miles of the eastern end of Gregory Bald trail out to Doe Knob on the A.T.  This is a nice little trek that meanders up and down - there were lots of flame azalea and mountain laurels on this trail in full flower. 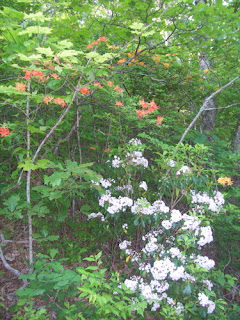 Reaching the junction of the Gregory Bald trail and A.T. made another connection for me.  I had hiked the A.T. from Newfound Gap down to Fontana Dam about 9 years ago - one of my very first long-distance backpacks in the park.  It was cool to come back to this place and know that I had been here before. 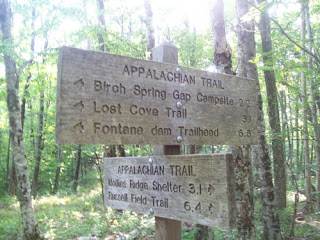 From here we turned back around up the Gregory Bald trail up to Gregory Bald itself.  The 0.6 miles from the Gregory Ridge - Gregory Bald trail junction up to the bald itself were rough - partly because it's pretty steep, but mostly because we'd already hiked 9 miles, most of them uphill...  But it was SO worth it.  Gregory Bald is an amazing place - covered with blueberry bushes, blackberry brambles and flame azaleas.  A few of the flame azalea were flowering, but you could see the buds on all of them - in a week it will be an amazing carpet of yellow-orange-red flowers! 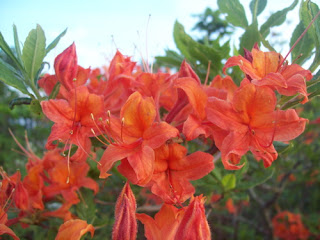 The trail goes straight across the top of the bald, and there are gorgeous views in all directions.  We were there late in the afternoon and the sun was slanting downwards giving everything a warm glow.  Unfortunately in the throes of exhaustion and wonder I forgot to take any panoramic pictures...  But trust me - it's well worth the climb.  We found the USGS marker at the top: 4,949 feet! 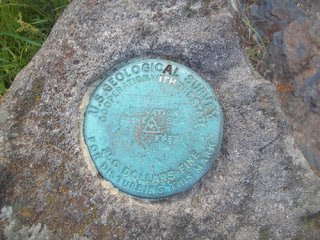 And also got to see a deer amble across the bald.  She knew we were there, but didn't seem perturbed. 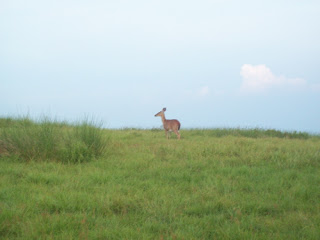 After soaking in the views for a while we headed down over the other side of the bald about 0.5 miles down to Campsite #13.  This is a beautiful campsite.  You have to make a reservation to camp there since it's heavily used, but it's really nice.  It's in a fairly level area, and there are about 4 or 5 tent sites, all nicely spaced so every group can have some privacy.  There were deer wandering all through the campsite for most of the evening, and a herd of them woke Shane up in the middle of the night. 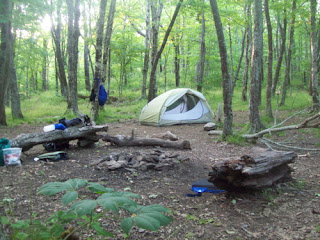 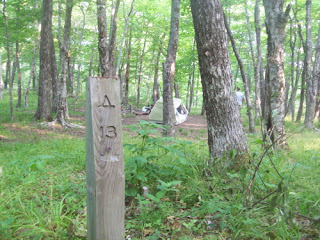 After setting up camp we ate and chatted the night away, finally getting to bed around 11 pm.  In the morning we were up and around by about 7 am, had breakfast and broke camp.  We were both a little stiff and sore from the day before, but that quickly wore off.  Campsite #13 sits at the junction of Gregory Bald trail and the Wolf Ridge trail which comes up from the North Carolina side of the park around Twentymile. 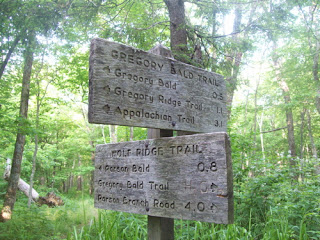 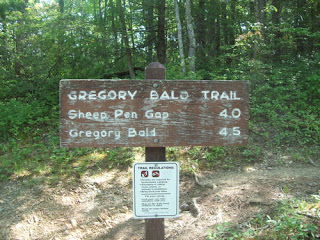 Along the way down we saw many nice plants still in flower including some mountain laurel in full flower.  This is one of my favorite flowers - my sweet daughter Laurel is named after it. 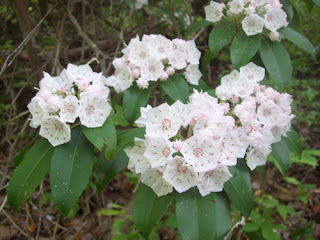 There are some big trees in this section - I can imagine it would have been very difficult to log up in the upper reaches of this area given how steep the terrain is.  Here's Shane standing by a really big old tulip poplar. 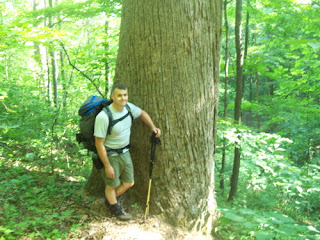 We arrived back at the car around noon, tired out but happy.  This was a very challenging hike, but very well worth the effort to see Gregory Bald.  Some day I'll have to go back at the right time to see all of the flame azaleas out in full flower on the bald and spend some time just lazing among them.

Til next time, happy hiking!
Posted by Randy Small at 2:57 PM