Trail Miles Completed: 5.1
Total Miles Hiked: 6.2
It's Spring Break around here so I'm taking advantage of the free time to get some good hikes in.  Today found me on the Little River Trail and Cucumber Gap Trail near Elkmont.  Spring has been in the air the last few days and it was supposed to be warm and sunny today.  It was (mostly) warm and (occasionally) sunny out on the trail, but it was in the mid 60s when I got back home and beautifully sunny!
Elkmont is a neat area in the park.  Former logging camp and then vacation home area prior to the formation of the GSMNP in 1934.  The Little River runs right through here and there's an excellent campground where we've spent many beautiful nights.  In mid-June every year there's an astounding display of synchronously flashing fireflies.
Today's trail starts near the Elkmont campground at the Little River trailhead.  The total trip took me up the Little River Trail to it's junction with the Huskey Gap trail, and then backtracking for about 0.4 miles to hop onto the Cucumber Gap trail which takes me back to Elkmont. 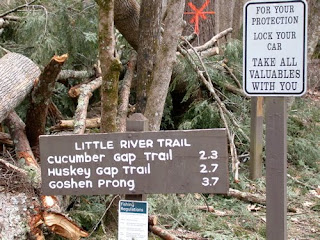 Little River trail follows the bank of the river and is a wide even path which is a former road and/or rail line used by the logging company.  Despite the warm weather there was still quite a bit of snow on the ground and parts of the trail had a thick coating of slushy ice making for some precarious hiking. 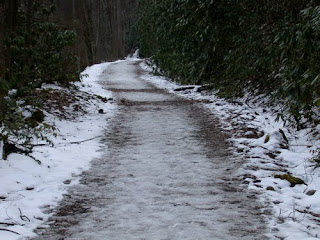 The river was beautiful as always - swollen with recent rains and melting snow it was moving pretty fast. 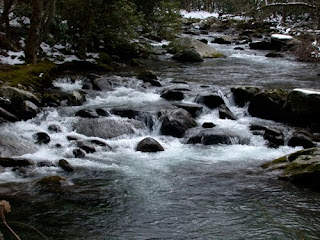 The trail follows the banks of the river with big rock cliffs on the right hand side and the river on the left for most of it's length.  At about mile 2.0 you cross over a plank bridge that spans Huskey Branch as it cascades into the Little River.  While a pretty small waterfall it's very picturesque, especially with the snow and ice surrounding it. 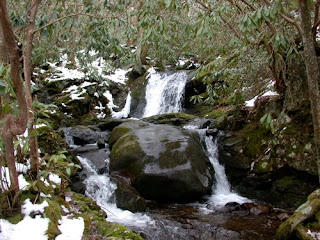 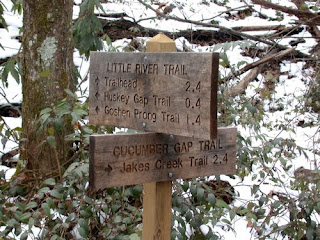 I stopped for a break and a snack at the Huskey Gap trail intersection.  The trail crosses the river over an old bridge here and there was a nice sandy bank to sit on to eat. 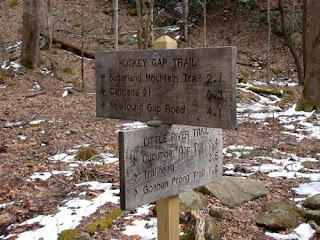 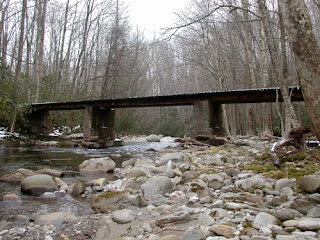 Back in my raft-guiding days all the guides used to build towers of rocks on the banks of the river.  The story goes that you pile up all your bad karma with the rocks and then when the river washes the rocks away it takes your bad karma with it.  I guess old habits die hard :-)  And I took it as a good sign that as soon as I finished my little tower the sun came out. 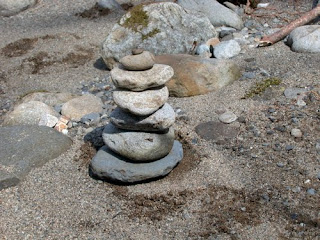 Here's the view upstream of where I sat to eat lunch. 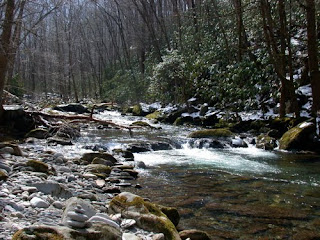 After lunch I headed back down to jump onto the Cucumber Gap trail.  This trail is more typical of the Smokies.  A "long, green tunnel" of rhododendron and hemlock trees and the floor of the trail twining with tree roots and jutting rocks.  There was considerably more snow here as I was moving up in elevation through a narrow shaded draw. 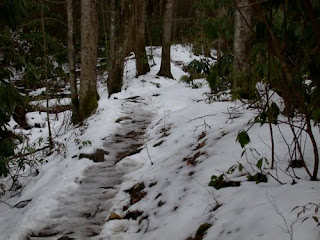 This trail winds up a draw and then up and over Cucumber Gap - named for the Magnolias ("cucumber trees") that grow there, and then back down into Elkmont.  Here in the gap I met a trio of backpackers who were on Spring Break from the University of Connecticut.  They had driven 14 hours from CT down to Knoxville to spend the week backpacking in the Smokies.  Not sure they were expecting this much snow and they were planning to go up high to the Appalachian Trail where the snow is probably still 1-2 feet deep!  (we, of course, got into a heated debate about who was more likely to win the women's basketball NCAA tournament, UConn or the Lady Vols) 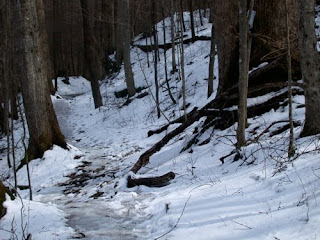 From Cucumber Gap the trail drops back down into Elkmont and dumps out at the Jake's Creek trailhead just up from Elkmont. 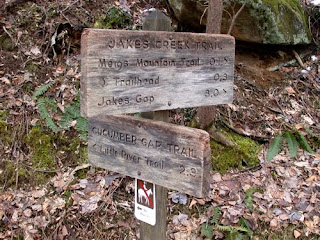 Here in Elkmont you can see the remains of many of the cabins that made up the summer vacation homes for wealthy folks.  While the park was formed in 1934 apparently the leases on the property for these homes didn't expire until 1992, and they've been in limbo ever since.  Some folks wanted them preserved as they were as an exhibit of what life was like in the early 1900s, while others wanted them torn down so the land could return to it's natural state.  I believe that the park system has finally decided to renovate some of the older historic cabins and remove the others.  Interestingly most of the cabins are in terrible shape - sagging porches and caved in roofs; but some of the older log cabin building are still solid and in fairly good shape. 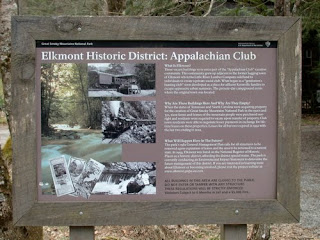 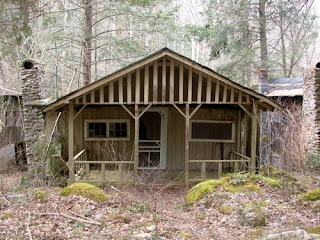 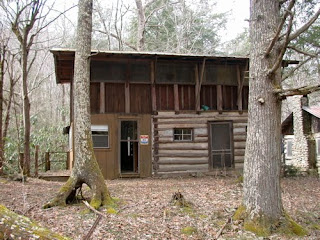 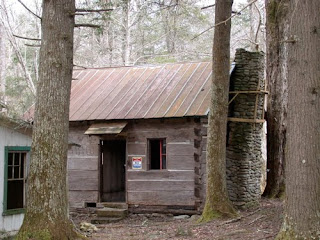 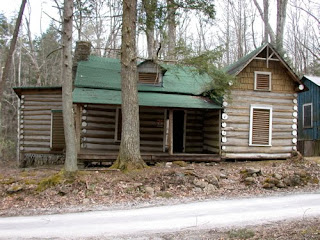 It was a beautiful day to be out and a great way to spend my first day of spring break.  This is a great loop of reasonable length for a day hike.  Great scenery that ranges from rivers to rocks to waterfalls to historic cabins.
Til next time - happy hiking!
Posted by Randy Small at 5:51 PM