I've been doing lots of short day hikes over the last few months, but haven't had a good overnight backpacking trip in a while. With the long Easter weekend and no school on Friday it seemed like a good opportunity to get out. I called my friend Shane and he was game to come along.  He's also working on completing all the trails in the park and hadn't completed these trails so it worked out well for both of us. 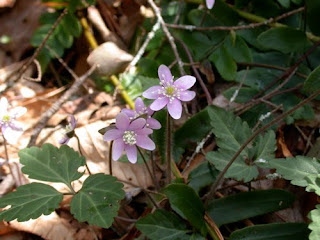 Chestnut Top trail starts at the Townsend Y, heads west and parallels the park border to Schoolhouse Gap where it ends.  Here the Scott Mountain trail picks up and continues west along the park border. Campsite #6 is near the top of Scott Mountain trail where it meets up with Indian Grave Gap and Crooked Arm Ridge trails that make up part of the Rich Mountain Loop. Chestnut Top trail is known for a fantastic wildflower display in the early spring, and there were a lot out like the sharp-lobed hepatica (Hepatica acutilobula) shown above (and no, those leaves do not go with those flowers). 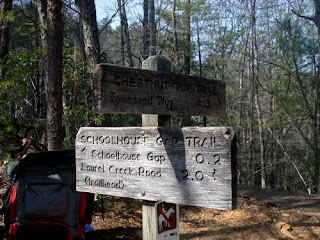 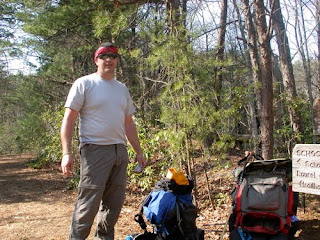 Chestnut Top trail (4.3 miles) meanders up and down rising along the ridges of the park boundary. It goes back and forth between moist, shady rhododendron and dry, exposed pine-laurel woods. The trail ends 0.2 miles from Schoolhouse Gap where an old road from Townsend comes into the park (the road still exists outside the park and the Schoolhouse Gap trail follows its course inside the park). 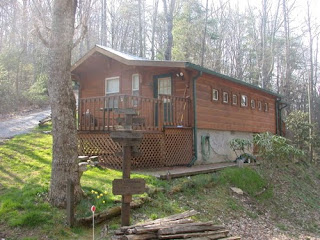 At Schoolhouse Gap there is a house that sits literally just a few feet from the park boundary.  It's a nice little vacation cabin that appeared to be unoccupied as we stopped to rest. 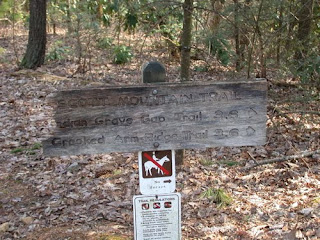 From Schoolhouse Gap we took the Scott Mountain trail 3.6 miles further west and higher up.  This trail also parallels the park boundary and rises steeply and steadily. Shane and I are both pretty experienced hikers, but this trail about kicked our butts...  The nearly continuous climb was rough, but there were some beautiful views into Townsend on one side and Cades Cove on the other. Because most of the trees haven't leafed out yet we could see a long way through the trees.  And there were lots of wildflowers starting to peek out. 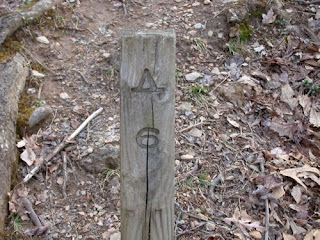 By the end of the day this campsite sign was MOST welcome! 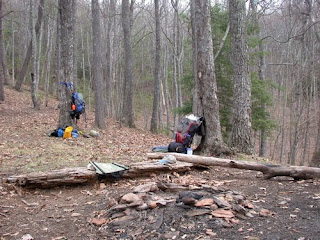 Campsite #6 is a nice little ridgetop site, with room for just a few tents and a nice fire ring for sitting beside. We got our tents up in a jiffy and made dinner (ramen, spam, trail mix & granola bars) then sat around the fire and chatted. 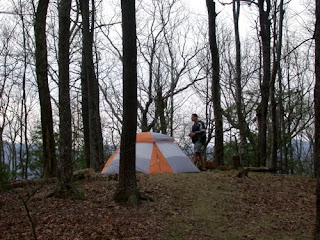 When we arrived a guy named Daniel from Michigan (that's him and his tent in the picture above) was already there and we shared the fire and talked with him most of the evening. He was an interesting guy - traveling around and doing software development work with his laptop, he'd been all over the eastern U.S. since January and was getting ready to head back home to Michigan soon. 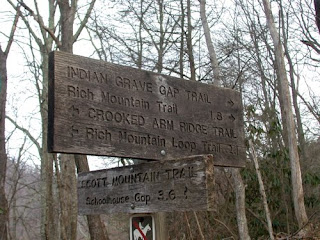 We conked out pretty early and the next morning got up, had breakfast and broke camp. We walked the quarter mile to the end of the Scott Mountain trail (trail junction sign above) to finish it off and then saddled up to head back down. Going back DOWN the Scott Mountain trail was considerably easier than coming up it the previous day.  We quickly covered the 3.6 miles back down to Schoolhouse Gap where we stopped for lunch (mac & cheese, tuna & crackers, more trail mix & granola bars).

In addition to doing the Chestnut Top & Scott Mountain trails I wanted to finish off the Schoolhouse Gap trail.  Jesse and I had done part of this trail on a previous trip (from Turkeypen Ridge trail to Laurel Creek Road), but I was missing a 1.1 mile section. Shane suggested that instead of just walking down the trail and then back up that we take an old trail (not on the current map) from Schoolhouse Gap down into White Oak Sinks and get onto the Schoolhouse Gap trail from there. I'd heard of, but never been to, White Oak Sinks before and it sounded like a great plan to me. (I could go on for a while here explaining the geology that resulted in this unique formation, but I'll spare you the details - basically, it's a big hole in the floor of the Smokies where the limestone base layer has been exposed and is full of caves) 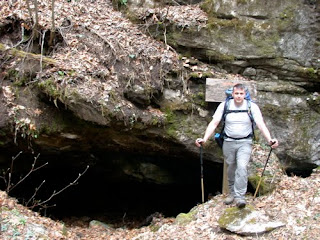 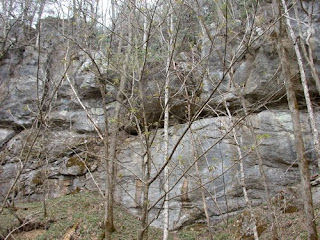 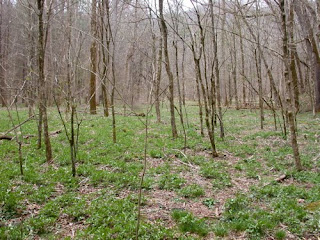 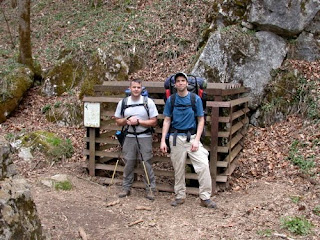 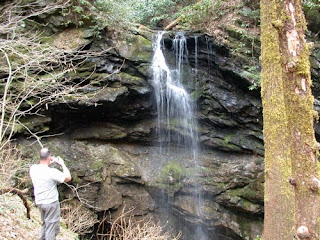 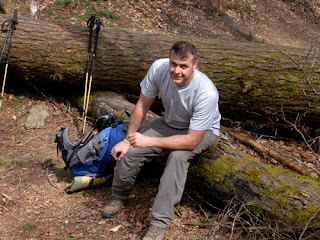 The pictures above really don't do justice to the place - it's truly astounding. The walls are sheer and high, and the floor is as level as a baseball field in places. There are cracks and caves and waterfalls all over the place. Entry into all caves is forbidden now to prevent the spread of white-nose syndrome that's killing bats all over the eastern U.S. The last place Shane took me before we headed out is called "the grotto" and has a really nice waterfall spilling over a ledge and down into a cave opening (see below). 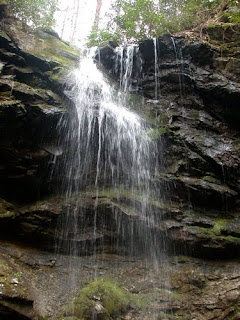 From here we headed up (again...) and out to the Schoolhouse Gap trail right near its junction with the Turkeypen Ridge trail. 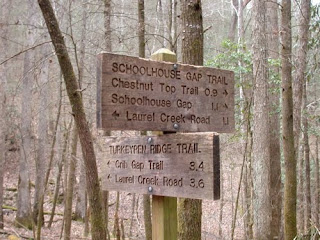 At this trail junction we met a group of 5 or 6 campers who looked like they didn't have a clue what they were doing. They were carrying their gear in duffle bags, had on jeans and T-shirts, and asked me "where's a good place to camp around here?" I asked if they had a trail map (no) or if they knew that you can only camp at designated sites (no). I got out my trail map and showed them where they were and where some good nearby campsites were.  I hope they found their way ok...  I was a little worried we might hear about them on the news the next day having to be rescued.
By now it was mid-afternoon so Shane and I headed back down Schoolhouse Gap trail (1.1 miles) to get back on to Chestnut Top trail and back to my car waiting for us at the Y.  Those last 4.3 miles really took their toll on both of us, and we were happy to get back to the car. I was pretty sore Saturday night, but very happy to have completed another 1% of the trails in the Smokies and visited a new part of the park. I want to go back to White Oak Sinks in a week or two and see it once the wildflowers are out in full force. It was a blast to have a weekend with Shane - we've hiked and camped a lot together with the Boy Scouts, but rarely just the two of us and I really enjoy his company.
So, til next time, happy hiking!
Posted by Randy Small at 7:46 PM