Last summer I saw a post by "Little Bryan" that showed a nice map image with the trail outlined and an elevation profile of his hike.  When I asked how he had created it he told me about the National Geographic Trails Illustrated software.  I finally took some time to research it and was pleased to see that it was both Mac and PC compatible (since I'm a Mac person).  The few reviews I found online were just so-so...  Their were complaints about the speed of the program, and about it's coverage.  The version I got is specifically for the Great Smoky Mountains National Park and that's all it covers.  But it wasn't terribly expensive (about $20 including S&H) from the National Geographic store so I figured it was worth a shot.

The day it came in the mail I was very excited.  I immediately loaded it onto my computer and started playing around with it.  The first thing I did was use the embedded menu option to check for program updates which told me that my software was up to date - no new versions available.  And I was deeply disappointed.  It was VERY clunky, very slow, and none of the control buttons along the top of the map were actually functional.  Using keystrokes I was finally able to get it to actually create a map for me, but then there were huge black boxes along the trail that obscured big chunks of the map.  Practically useless.  I was all set to write a scathing review and send it back when I did a little looking on the support page.  It turns out that actually there IS an update for the Mac version to make it compatible with the latest operating system (Snow Leopard, Mac OS 10.6) despite the fact that the program told me that there were no new updates.  Once I installed this update, things started working like they should.  The menu buttons are there and they work.  The trail shows up like it should with small yellow diamonds instead of huge black boxes marking waypoints along the trail.

Here's an example of what I was able to create - a map of a hike I took a couple of years ago up the Middle Prong - Lynn Camp Prong - Miry Ridge - Panther Creek - Middle Prong trails. I like it because it not only shows the actual route, but also provides an elevation profile. 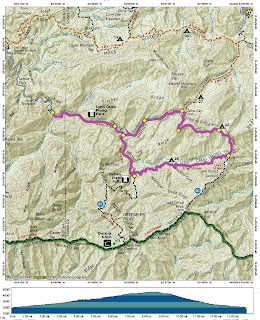 Ok - so it works like it's supposed to now.  And I'm able to create the kinds of maps I wanted to, and the route finder actually follows the existing trails (rather that having to try to trace them by hand as in the really old versions).  BUT, I'm still not exactly thrilled with it.  First, it's still slow and clunky.  There are long delays between clicking a function button and being able to do that function.  Second, it's not perfect in its tracking of trails.  If you look closely at the picture above you can see regions of the trail that it cuts off (and thus don't get included in the mileage or elevation profile). And as far as I'm aware there's no way to export the maps / elevation profiles as anything other than pdf files or files read by the Trails Illustrated software.  So to get the pic above I had to (1) create the map, (2) export it as a pdf, (3) capture the screen image from the pdf, (4) convert the captured screen image from a tiff file to a jpg file.  Kind of a long process that should be easily done from within the program itself (e.g., "export as .jpg").

There are a number of other things the program does.  You can do "flyovers" - see a 3D rendering of what the trail will look like as you hike it (also slow and clunky and not especially useful).  You can "find" particular features (trails, lakes, etc.) using the Gazetteer feature.  You can import/export GPS data (I haven't tried this feature yet).

So, I think I'm going to keep it and I'll use the clunky work arounds to produce pics I can put up on here, but if you're looking for a really seamless and easy-to-use program, I'm afraid this isn't it.  But as far as I'm aware it is about the only software option out there.  I'd be interested in other users thoughts on this program and/or alternatives.
Posted by Randy Small at 10:20 AM