Sarah and I have a new tradition of spending a weekend in a cabin near the Great Smoky Mountains around our anniversary.  It began last year with our 20th anniversary and we had such a good time we vowed to do it every year.  Last year we hiked the Chimney Tops trail - it was rough, but a lot of fun.  This year I chose the Old Sugarlands Trail.  I had actually hoped to go to one of the waterfalls like Rainbow Falls or Grotto Falls, but the Cherokee Orchard Road that leads to these trailheads was closed for construction. 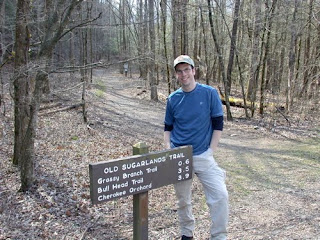 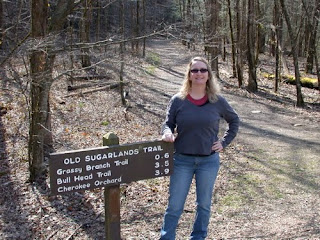 The trail starts just north of Sugarlands visitor center and winds its way south along the banks of the West Prong of the Little Pigeon River paralleling Newfound Gap Road, but you can neither see nor hear the road from the trail.  Sarah took this picture early on, and while it may LOOK as though I'm trying to figure out where we are, I REALLY did know...  I just have a thing for maps, and I love to look at the map as we hike along and figure out exactly where on the trail we are, or what creek we're following, etc. 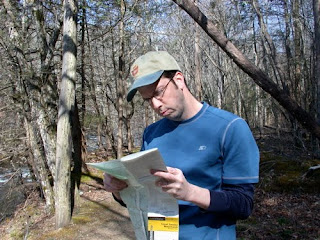 The first of MANY trail junctions we came to was this one.  Our hike took us to the right along the Old Sugarlands Trail, but we eventually looped back around to this junction via the Grassy Branch trail. 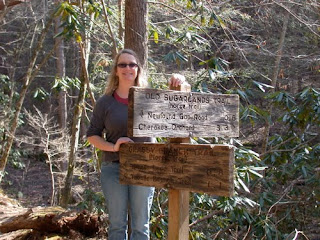 This area was apparently heavily settled in the times before the park.  Horace Kephart spoke of the Sugarlands as being a wild place, full of moonshiners and ne'er-do-wells in the early 1900s.  It's named for the Sugar Maples that grow here.  The trail goes past lots of old homesteads and the location of some of the CCC camps from the 1930s.  The men in the CCC were responsible for a LOT of the park development, including trail building, fire tower construction, and bridge & road building.  The pictures below are of a marker installed in a bridge built by the CCC, and of the area where the CCC camps were. 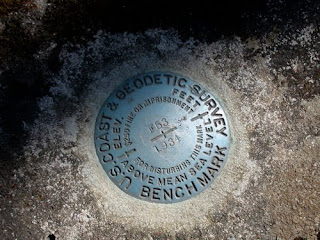 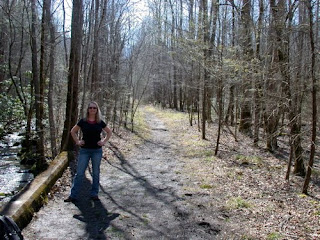 Shortly after this the trail starts to wend its way to the east, up and away from the river and along an old road bed that leads from Sugarlands to Cherokee Orchard.  The road climbs steadily, but not steeply and passes many old home sites.  You can see some of the rock foundations, boundary fences, and plants like daffodils and yuccas that were planted by the settlers. 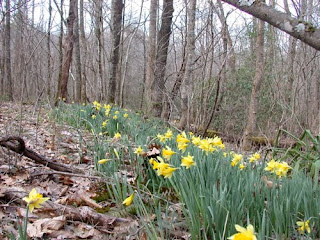 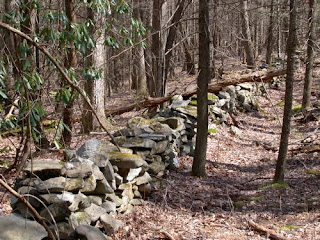 We also passed an old boar trap.  Feral hogs are a terrible problem in the Smokies.  They destroy native vegetation and disturb the ground with their rooting, and they prey on native animals as well.  The park has an ongoing program to control the population by hunting and trapping them, but at times it seems like a losing battle. 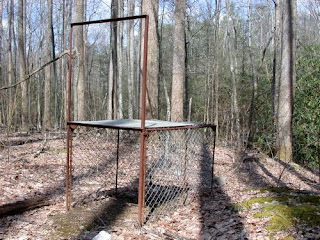 As the trail continues to climb up to Cherokee Orchard it meets junctions with several other trails including the Twomile Lead Trail, the Twomile Branch Trail, and the Bullhead Trail.  The Twomile trails are horse trails used by folks coming up from the stables down near Sugarlands, and are not on the official park trail map, so they don't "count" in the 900 miles.  They're also hard to figure out because they're not on the maps so it's difficult to figure out exactly where they go and how long they are (hence the guesstimate of our total final mileage for the day). 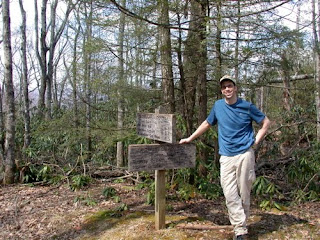 Almost at the end of the Old Sugarlands trail it crosses LeConte creek, splashing down from the slopes of Mt. LeConte.  It's been a wet winter so there was lots of water in the creek and it was beautiful!  The trail crossing is over an old log bridge about 10-12 feet above the creek. 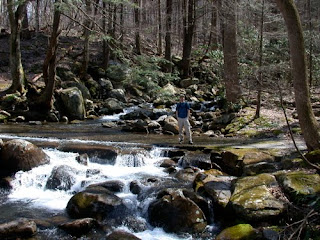 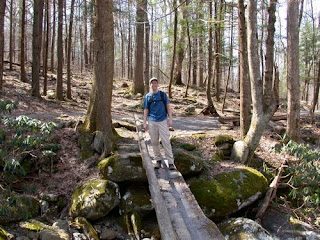 The trail dead-ends shortly thereafter at the Cherokee Orchard parking area which contains the trailheads for Trillium Gap and Rainbow Falls trails.  We could see the ongoing road construction from here. 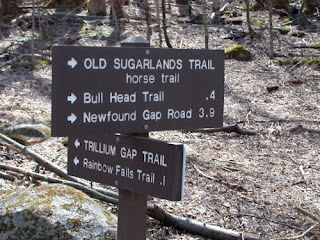 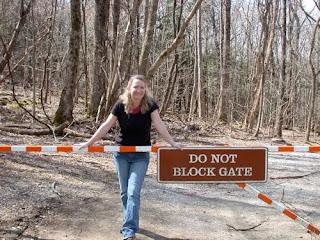 We stopped here for lunch on a sunny rock overlooking LeConte Creek, and then turned to head back down.  Being adventurous and wanting to explore more trails I suggested we take the Twomile Branch trail back down instead of re-tracing our steps.  According to the guide book it's a shorter trip.  And maybe it is, mile-wise, but it's a rough trail.  Rocky and muddy with lots of blow-downs that have yet to be cleared.  AND, as noted above, I wasn't exactly sure how all these trails came together since they're not on the map...  We eventually made it down, and I was very happy for the excellent trail signs at all trail junctions to keep us going in the right direction. 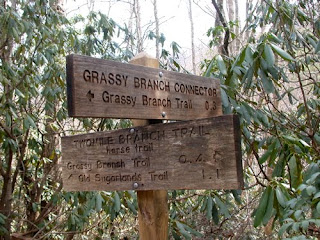 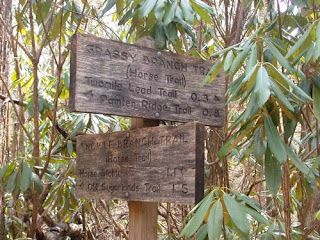 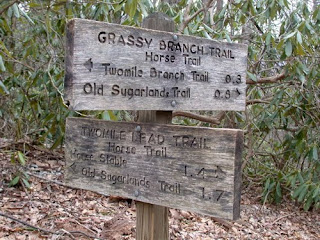 Ultimately we used the Grassy Branch trail (which is not listed on the map OR in the book) to get us back to the beginning of the Old Sugarlands Trail.  But not without having to circumnavigate several blow-downs including this REALLY big old pine tree. 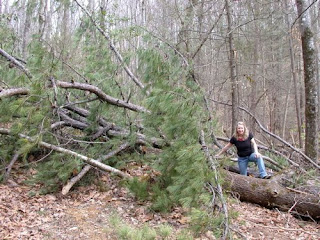 All in all it was a good hike.  It's always neat to see evidence of the people who lived here before there was a park, and imagine what their lives were like.  We also daydreamed together about a cabin that we'd love to have near the park someday...  The weather was beautiful - sunny and warm, and the companionship was excellent.  And man did it feel good to get into the hot tub at the end of the day!
Happy Hiking!
Posted by Randy Small at 1:24 PM