My wife Sarah and I traditionally spend a weekend in a cabin in Townsend, TN (the "quiet side of the Smokies") some time around our anniversary.  We spend the Saturday of the weekend out on a hike, and then head back to the cabin to soak in the hot tub after eating dinner out (this year we ate at Miss Lily's Cafe in Townsend - it was fantastic!).  This year we decided on a short and non-strenuous hike (in previous years we had done the Chimney Tops trail and the Old Sugarlands trail), but wanted to see something neat so we decided to go see Grotto Falls.

Grotto Falls is on the Trillium Gap trail which is in the Gatlinburg area off of Roaring Fork Motor Nature Trail.  I had been in this area before when I did the Rainbow Falls - Bullhead trail loop up to Mt. LeConte, but I'd never been on Roaring Fork before. 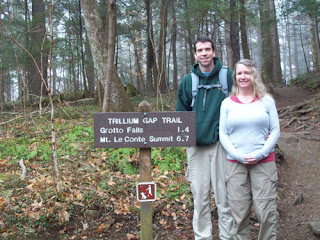 We arrived around noon and the parking areas were absolutely packed, as was the trail.  It was warm, but grey and cloudy and the trail was wet and muddy from recent rains.

We'd been moving up the trail for probably 10-15 minutes when a guy came running down the trail asking if we had cell phones with signal...  Not a good sign.  We moved a little further up the trail to find a gentleman who had slipped on a wet log, fallen and broken his leg.  The guy running down the trail and his wife were the first folks to come across this guy after he'd fallen (he was hiking alone).  We stayed with him and tried to get him as comfortable as possible, keep him warm and keep him talking while the other guy went to get help.  Luckily he was able to get cell signal and call in the rescue squad.  All in all we probably stayed with the guy for about an hour until the rescue squad got there and got him prepared to be evacuated.  A number of people stopped to try to help, pray or commiserate with him and he was in remarkably good spirits for someone who was clearly in tremendous pain.  I happened to be wearing my Boy Scouts sweatshirt and he had been a long time scout leader so we talked for a long time about scouts.  It was particularly sad because he'd just had knee replacement surgery a couple of years earlier and was worried that this break might end his ability to get out on the trails that he loves.  On the off chance that you ever read this blog Ray, I hope you're doing ok and that the docs got you fixed up!  Maybe we'll see you out on the trails again some day.

We headed on up the trail after the rescue squad asked people to clear out to make room for the evacuation, but were in a bit of a somber mood.  The trail and the clouds seemed to match our mood.  The trail is well-worn and was very muddy.  If the day we were there is any indication then it is a WELL-traveled trail.  It winds along and up a ridge through some nice old-growth forest.  As you come around a corner you get your first glimpse of Grotto Falls from well below. 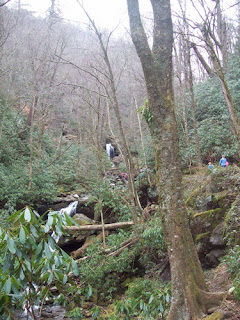 We stopped a little further up the trail along the creek for lunch and then continued on up to Grotto Falls, which was every bit as crowded as Laurel Falls might be on an average day. 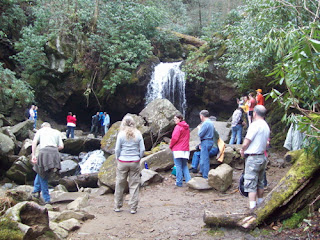 Grotto Falls is a big attraction because not only is it close to the trail head (just 1.4 miles of pretty easy hiking), but it's unique in that the trail actually passes behind the falls. 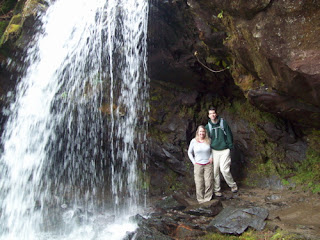 It really is a pretty area and the falls are well worth seeing.  From here we turned back down and pretty soon the sun came out and warmed us up, both inside and out.  Here's a view of the trail after the sun came out. 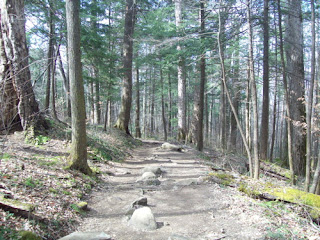 We made it back to the car (and talked a lot about Ray and wondered how he was doing) and prepared for the drive around the rest of Roaring Fork.  I was really pleasantly surprised!  In many ways Roaring Fork is a lot like Cades Cove - it was a thriving community and many of the cabins and homesites are still there and are being preserved by the park.  It's different in that it's set in a beautiful and pretty narrow  hollow made by the Roaring Fork instead of a wide valley like Cades Cove, but it has a lot of the same feeling.

We stopped by the Ephraim Bales homesite which was occupied from the late 1800s - early 1900s.  A two room log cabin (one living area, one cooking area), a barn, smokehouse and hog pen, all situated near the banks of the Roaring Fork (which really was roaring with all the recent rain!). 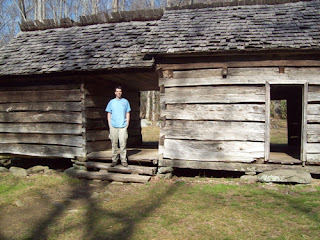 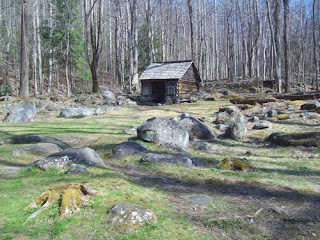 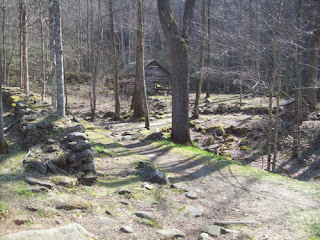 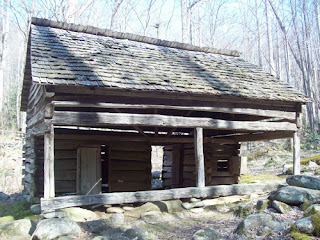 I look forward to going back to Roaring Fork someday with the kids and exploring it more! I was a beautiful river and all kinds of cool cabins and houses along the way.  From here we headed back to Townsend, dinner and hot tub.

As an aside, this morning we decided to go for another short hike before heading home.  We headed up to the Middle Prong trailhead intending to meander up the Middle Prong trail for a while, but ended up being adventurous and taking the Thunderhead Prong-Defeat Ridge manway that leads to the right at the trailhead.  While we only hiked a mile or two up the trail, it was easy to follow and led through a beautiful river valley.  Definitely someplace we want to go back to and take the kids, and maybe one day I'll try the whole trail up to the A.T. on Thunderhead Mtn (although from what I've read about it, it sounds pretty daunting). 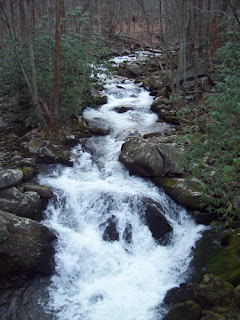 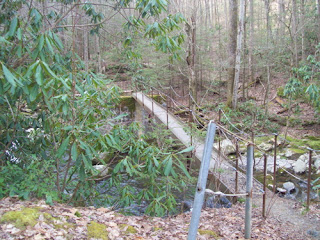 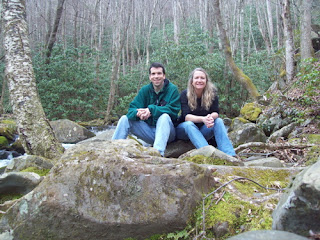 It was a great weekend with my sweet wife of 22 years, and a nice couple of days on the trails.  Spring is definitely springing around here, and it's a great time to be out in the park.

til next time, happy hiking!
Posted by Randy Small at 6:28 PM