Ok - let's just get this out of the way upfront...  The Snake Den Ridge trail is steep...

Snake Den Ridge trail starts in Cosby Campground, right near campsite B-51. So you have park in the hiker's parking area at the front of the campground and then walk through the campground to find the trailhead. 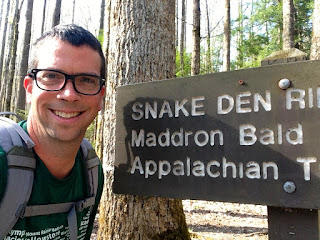 About the first 0.7 miles of the trail follows an old road. The trail is gravel and wide. Along the way you will pass the Williamson Cemetery on the right side of the trail (as you are ascending). It's a small cemetery of maybe 15 or so graves, mostly folks from the Williamson family. Cemeteries in the Smokies always seem to be carpeted in moss, giving them an odd yellowish green glow.

At the end of the gravel road section of the trail is a loop turnaround, and from here on out the trail assumes a more typical Smokies trail-like feel. From here to the top the trail is generally a single hiker wide, sometimes smooth, but often rocky and rooty. After leaving Cosby Campground the trail meanders over a couple of watersheds and has its only bridged crossing at Little Rock Creek.

From here the trail starts to ascend the flanks of Snake Den Mountain, and follows the crest of the ridge up, ultimately to meet the Maddron Bald trail and then the Appalachian Trail. Snake Den Ridge trail is open to both hikers and horses. In some of the steep and/or muddy areas the horses have a pretty serious impact on the trail.


The lower parts of the trail were fairly barren wildflower wise. But through the middle section there were lots of Sweet White Trillium, Phlox, Chickweed, some nice patches of Squirrel Corn, Foam Flower and Bishop's Cap. As I neared the top of the trail, the sides became carpets of Carolina Spring Beauty, and I found some beautiful patches of Trout Lily.


There are also some very nice views from rocky outcrops along the trail. As the trail ascends along Snake Den Mountain there are several spots where it rounds the edge of a ridge before ascending further. These edges provide views down into the valley below, especially this time of year when the leaves are still off of the trees.

As you near the top, the Snake Den Ridge trail meets up with the Maddron Bald trail. I did the Maddron Bald trail and Albright Grove Loop in December 2016 under very different conditions. December was cold and clear with lows on the trail around 15 degrees F. This day was warm and sunny (I was sweating on my way up!) and a very pleasant day to be out on the trail in shorts and a t-shirt.

Just 0.7 miles up from this trail junction is the Appalachian Trail and the terminus of the Snake Den Ridge trail. I stopped here and chatted with a few other day hikers who were making a loop out of Cosby up Low Gap - A.T. - Snake Den Ridge; they were also working on completing their maps of the park. Then I got to chat with a couple of section hikers who had started at the southern terminus of the A.T. at Springer Mountain, GA and who were headed up to Hot Springs, NC. It was nice to meet them and hear their stories of the trail.

From here I turned back and headed down the Snake Den Ridge trail back to my waiting car at Cosby Campground. Needless to say going down was considerably easier than coming up. That said, while Snake Den Ridge trail WAS tough going up, it wasn't as difficult as I had feared. It's a bit of a slog in parts for sure, but never did I think I was about to die... The views, the wildflowers, and the sense of accomplishment were my reward.

I am closing in on being half-way done with my quest to hike all the trails in the Smokies.  Most of the Tennessee side of the park is complete, but the North Carolina side of my map looks woefully bare. Going to have to plan some longer excursions and some multi-day backpacking trips to knock out those trails.

Hope you all have had a chance to get out and enjoy the trails and the wildflowers this spring!  Til next time, happy hiking!
Posted by Randy Small at 8:14 PM